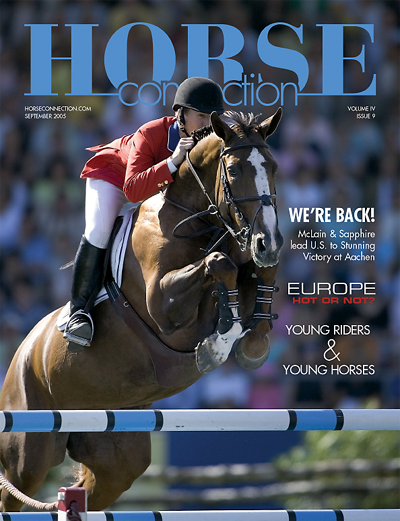 There is so much bad in the best of us and so much
good in the worst of us that is doesn’t behoove any of
us to talk about the rest of us. 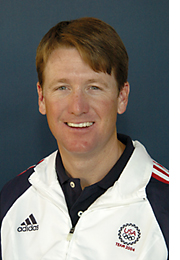 The U.S. showjumping team made history on the afternoon of August 25, by winning the Samsung Super League Nations Cup at the biggest horse show in the world, the Aachen CHIO in Germany. And they just didn’t squeak by, they dominated, finishing eight faults ahead of the French and Dutch teams, who tied for second. The German team finished a distant seventh. With this victory, the U.S. team takes over the lead in the Samsung Super League season standings. We’re back as a dominant force in the world of showjumping and a new hero has emerged in our sport. His name is McLain Ward and I am proud to feature him on our cover this month.

I am sure that there are some of you out there that take offense to my calling McLain a hero, but rest assured, among the many that we have regarded as heroes in this country, he definitely qualifies.

McLain Ward led our stellar team consisting of Beezie Madden, Jeffery Welles, and Laura Kraut, with two clear rounds, one of only two riders to go clear, leaving the anchor rider, Beezie, with an eight-fault cushion. Then he went clear in the Aachen Grand Prix to get into the jump off where he and Sapphire finished fourth. AND HE DID IT ALL WITH A BROKEN COLLARBONE! And to top it off, Sapphire, his ten-year-old Belgian Warmblood, was named Horse Of the Show. To be named Horse of the Show among the best 40 horses and riders in the world says something about this horse and rider and says it loud and clear. McLain Ward is one of the top five riders in the world.

Now is the time to put the past in the past with regards to McLain. We all know about the violation, his ban from Aachen, and the sad saga of his father. There are many in the horse business that continue to condemn McLain, and those bitter souls need to be quieted once and for all. He has suffered for his mistakes, and probably more for his father’s. He has overcome adversity and under strict scrutiny, more so than most, has risen to the top ranks of his sport. He left Aachen, according to news reports, as a crowd and media sensation. The Germans have forgiven him and embraced him, and it’s time we do the same.

The youngest rider to win over $1,000,000 in prize money and winner of scores of grand prix, McLain has nothing left to prove to anyone. Everyone has made mistakes in life. Several equestrians have had FEI violations over the years, but McLain has had to bear his violation like a cross. Has he suffered for the sins of his father? Probably, but it’s time to embrace this rider as a true hero who has overcome his past, as most heroes must do, and climbed to the top of the mountain.

When top international riders were testing positive for drug violations during the Olympics, our team was clean. If McLain’s bit hadn’t broken during the individual final, he might have had another medal to go with the team gold that they won, but didn’t rightfully receive on the Olympic podium because of the cheaters.

Lance Armstrong is considered a hero, yet allegations have popped up about possible drug violations from his past. Lance has overcome adversity to reach his pinnacle, and yet I don’t hear people trying to tear him down based on these allegations that have yet to be proven, just like the allegations against Ward that have never been proven; not a requirement for FEI violations and punishment. Ward did accept his punishment and served it to the satisfaction of the FEI. He competed in good standing and qualified for the Olympic team. He has put the past behind him and so should we.

Though no one can go back and make a brand new start, anyone can start right now and make a brand new ending. That is what McLain is doing. To those of you that refuse to forgive him for past mistakes, allow me some words to help guide you out of your self-imposed darkness.
One forgives to the degree that one loves. When you choose not to forgive, the experience that you do not forgive sticks with you. When you choose not to forgive, you basically agree to wear very dark, gruesome sunglasses that distort everything, and it is you who are forced every day to look at life through those contaminated lenses because you have chosen to keep them. Those words are from the Seat of the Soul by Gary Zukaw. Everyday I see people wearing these sunglasses, preventing them from seeing the light, not just from other people but from their own soul.

This unknown quote has always been a favorite of mine and I’d like to share it with you. I think it pertains to a lot of what goes on in the horse business.

There is so much bad in the best of us and so much good in the worst of us that is doesn’t behoove any of us to talk about the rest of us.

I’ve been on my soapbox long enough. We should be very proud of our U.S. team. They have all worked very hard with much sacrifice to reach the level that they have. The Europeans better start looking over their shoulder because in the words of that scary movie, we’re baack!

One last thought for McLain, regarding the people who in spite of everything will never give you your due, these words from Benjamin Jowett. Never retreat. Never explain. Get it done and let them howl.