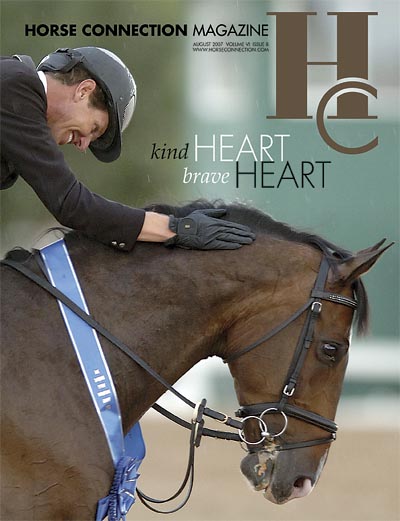 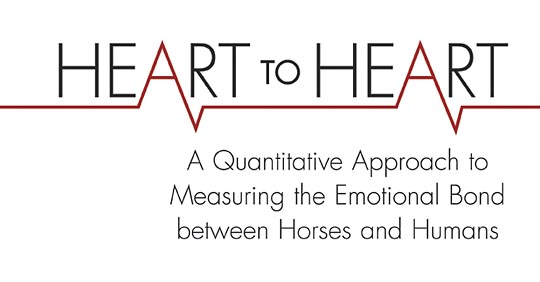 We have all heard that overused quotation from Sir Winston Churchill “There is something about the outside of a horse that is good for the inside of a man.” Who can argue with the thought? It is why, perhaps selfishly, we love horses so much.

But if you could see scientific data, gathered by the use of high technology, that proves how your horse feels about how good the inside of you is for the inside of him, would you be brave enough to look at the facts?

Well, that perspective is here. And Ellen Kaye Gehrke, Ph.D, a consultant and professor of international business and management, is using it as she and her research team engage in a series of scientific studies to measure the presence of emotional coherence and incoherence between horses/horses and horses/ humans. Gehrke has cold hard data that may warm your heart. 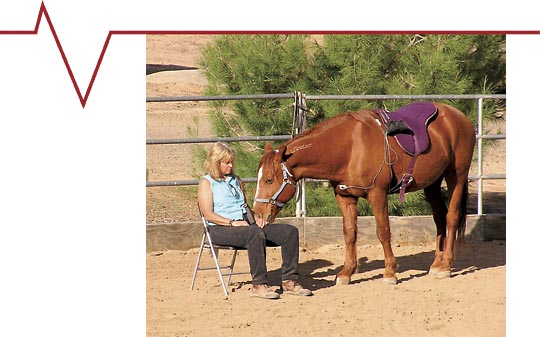 Gehrke is an intrepid explorer of the world of horses and people. Ten years ago she began adopting and training wild mustangs and ranch horses needing remediation, to be safe and fun trail horses. The patient and diplomatic handling that these horses required challenged her awareness of the complexity and delicacy of interaction between humans and horses. Gehrke later looked into the rapidly growing field of equine facilitated learning and became a member of the North American Handicapped Riders Association (NAHRA), the Equine Facilitated Mental Health Association (EFMA), and the Equine Guided Education Association (EGEA). At her Rolling Horse Ranch in Ramona, California, she began including her horses as co-facilitators in her work to change the leadership and organizational skills of her business clients.

She points out that an entire Equine-Assisted Activities (EAA) industry has sprung up based on the assumed bond that horses and humans share. “The EAA field has long asserted that horses tend to mirror or reflect the human emotional experience, and claim that horses are effective partners for facilitating human healing, and achieving higher levels of personal growth and leadership development. However, there has been relatively little quantitative research demonstrating the psycho-physiological linkages that occur between the human and the animal—particularly with equines. We have all heard the statement ‘horses can sense when you are afraid.’ With this research we are beginning to understand how they can know.”

Gehrke’s research employs the practice of measuring Heart Rate Variability (HRV), the beat-to-beat changes in the heart rate. Any electrocardiogram (ECG, EKG) test administered in a doctor’s office measures the electromagnetic signal which the heart uses to send neurological information to the brain and the rest of the body on different levels. The heart has its own genius; among many actions it takes, it can cause a blood pressure wave which changes the electrical activity in the brain, and it also plays a part in balancing stress hormones. This electromagnetic energy tells the story about what is going on inside us physically and emotionally, Gehrke explains.

“HRV dynamics are particularly sensitive to changes in emotional states, and positive and negative emotions can readily be distinguished by changes in heart rhythm patterns, which are independent of heart rate. During the experience of negative emotions such as anger, frustration, anxiety, sadness or depression, heart rhythms become more erratic or disordered (or incoherent). Conversely, sustained positive emotions such as appreciation, love, or compassion are associated with a highly ordered, or coherent, pattern in the heart rhythms, and can be regarded as an indication of physical and mental health states.” 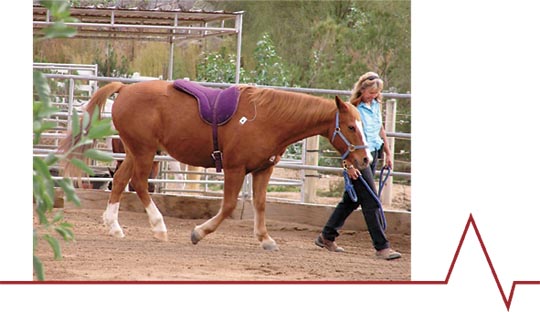 The Institute of HeartMath® in Boulder Creek, California, has developed simple-to-use tools based on the analysis of heart rhythm patterns that track coherent and incoherent heart rate variability patterns, which indicate the psycho-physiological state of the human. Gehrke had used the HeartMath stress reliever system to improve her own personal autonomic system and found the tool so compelling that she became a licensed HeartMath provider of stress management training. During the licensing program, Gehrke became familiar with other HeartMath research. She recognized that the HRV measurement might be a way
to quantitatively measure HRV synchronization between a human and a horse, so she teamed up with the HeartMath research team to determine if the bonding relationship could be measured. Since HeartMath is a recognized leader in researching the critical link among emotions, heart-brain communication, and cognitive function, it made perfect sense to work together. Gehrke already knew anecdotally and from her own experience that strong bonds can form between horses and humans. However, she wanted to explore quantitatively whether it was possible for the HRV of horses and humans to reflect that “mirroring” relationship that is so often referred to in the Equine-assisted Activities field. Thus the journey began.

In order to determine if this avenue of investigation was even worth pursuing the research, Gehrke and the HeartMath team conducted a controlled experiment to determine if any synchronization would occur when horses and humans interacted. Results were favorable–yes there was something there. “Next, we did autonomic assessments for 12 horses of all genders, sizes, breeds and ages. We found that the horses all had about the same heart rate patterns. You can see on the graphs when they’re sleeping or playing, for instance. Then we did experiments on pairs of horses. We were very curious to see that the heart rates of the horses who were inseparable friends were entrained, or aligned, with each other. This proved true the statement that horses are sentient beings…reflecting various emotional states when stressed or happy. A pair of horses that were known to be indifferent to each other had completely different and unsynchronized heart rates.”

The team also discovered that horses have similar patterns to those that humans have when they are in coherent and incoherent emotional states. The heart of a horse is five times bigger than a human so the possibility of entrainment doesn’t exist–however, results did show mutual synchronicity. Interestingly, Gehrke and HeartMath noted that horses seem to live in a more coherent state most of the time and humans tend to live in more incoherent states. This could be significant when examining the horse-human bond!

“After the first three pilot studies,” Gehrke continues, “we began to wonder if we could prove with scientific data the claim that horses reflect the inner state of the human. So we did some work with humans and horses. We measured the HRV between a horse-human pair that were very familiar with each other and then the same horse with a human it was unfamiliar with. We found that it didn’t matter whether the horses knew or didn’t know the person. The horses perceived, in the moment, coherent or incoherent human HRV and began reflecting that human HRV in their own behavior. It became apparent that the horse’s heart rate would synchronize with the human’s, although it did not appear that the human would reflect the horse’s emotional state.” 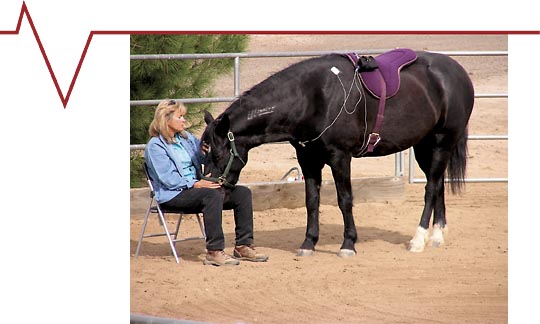 Gehrke participated in the study with her own horses. She and her horses wore 24-hour ambulatory ECG recorders so their HRV could be measured in different situations and under different conditions. The protocol followed was the same for each of the horses. During specific periods Gehrke groomed, fed, rode and just relaxed with them, and the HRV results made it clear that Ellen’s horses were responding to her different states. She had learned one of the HeartMath techniques called Heart Lock-In®, which is similar to biofeedback. The Heart Lock-In helps us to learn to sustain our focus on positive emotions such as gratitude and love, emotions which when experienced actually create positive physiological responses which can immediately be seen in readings on the equipment. When Gehrke seated herself and entered the Heart Lock-In periods separately with her horses, she focused on her love and appreciation for them. Three of her four horses immediately walked over and engaged with her. Shiloh put his nose in Gehrke’s lap and stayed with her for most of the Heart Lock-In period. The HRV patterns of the three horses that joined Gehrke during this period became more ordered.

“Our pilot studies have clearly indicated that human emotion affects the state of the horse,” she says. “Our next study will be more complex. In the first phase, three horses and 12 humans will interact variously in human/horse pairs within a 40-minute protocol and HRV data will be collected. Then, the 12 human participants will receive training which includes specific positive emotional focusing techniques. They will practice “emotional-shifting” and “coherence-building” for four weeks prior to the second data collection. It is anticipated that the second set of data will show a specific and measurable change in the humans’ HRV patterns, which will be reflected in the horses’ HRV patterns. HRV patterns that are synchronized in a horse/human pair indicate a greater psycho-physiological linkage between them. In plain English, that means a stronger bond.”

Ultimately, the work of Gehrke and her team confirmed that it would be possible to quantitatively measure the presence and level of human-equine relationships. The series of four pilot studies performed so far have opened up new possibilities to understanding the horse-human bond. Gehrke is currently researching funding to allow her to continue her work, and gives great credit to The Institute of HeartMath. “The project was my idea, but HeartMath has shown great interest in it. They have been an excellent, supportive partner in the research…they have provided the scientific support –analyzing the data and helping with research design.

Heart to heart, one heart at a time….

[NOTE: Author Kip Mistral prides herself on the close relationship she has with her Andalusian stallion Valentín. But she wants to hear it from “the horse’s mouth.” Ever the experimenter, Kip is so intrigued by Dr. Gehrke’s research that she has asked her to do a study of their HRV patterns in August and September. Kip will write a follow-up article about this experience for Horse Connection. Be watching for the update this fall.]

For more information about The Institute of HeartMath®, see www.heartmath.org