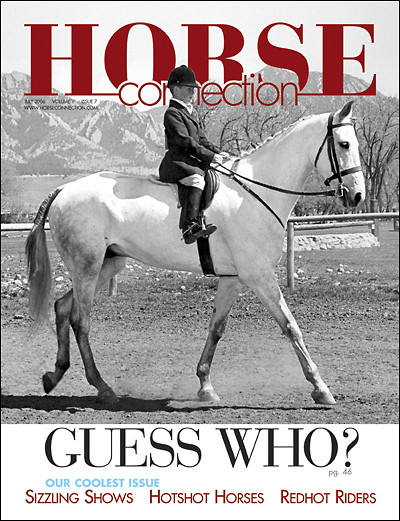 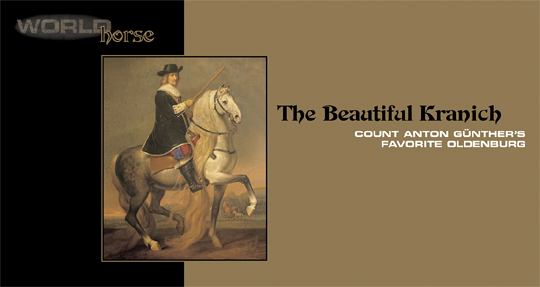 The driving force for a writer is curiosity. One minute we’re minding our own business, and the next we’re experiencing something like whiplash when our attention is suddenly diverted by something fascinating and mysterious. And then we can’t rest until we explore it, wherever it leads…

I had inspected the wonders of Rosenberg Castle in Copenhagen this summer when that thing happened in the gift shop. I discovered a card reproducing an ancient, crackled painting of an elegantly stylized white horse with a heavy, wavy mane and tail that dragged the ground. “Spanish horse,” I proclaimed to myself, knowingly.

At the same time I was surprised. Why in the world did I see a painting of an extraordinary Spanish horse in a Danish castle? I bought the card and tore the cellophane wrapping open on the way out of the castle, pondering the caption. The wonder horse ‘Kranich’ famous for its mane and tail. Oldenburg c. 1640. A wonder horse in 1640? I had to know more about this beautiful Kranich. And so I started my search for information, and it took me more than 400 years into the past.

Long ago, in a land far away… 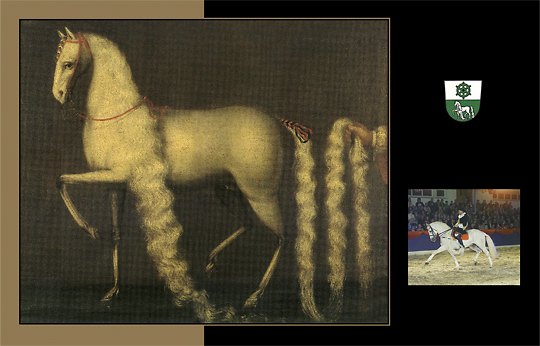 Oldenburg, located in the modern region of Lower Saxony, one of the ancient provinces of Germany—known in Kranich’s time as states—was historically regarded (and still is) as one of the most important agricultural and livestock breeding areas in the country. The rich soil of the marshlands produces not only good crops of wheat, oats, rye, hemp and rape, but excellent grazing. It is here that this particular part of equine history would be made.

In these favorable circumstances, Graf (Count) Johann XVI von Oldenburg, ruling 1573-1603, instituted a breeding program to produce war horses, the best of which he gave as gifts to royalty, aristocrats, and military leaders who distinguished themselves in battle. Of the best of the local large and powerful Friesian mares, he crossed imported Turkish, Neopolitan, Andalusian and Danish stallions. The resulting early “Oldenburg” horses were known for their coal black color, powerful conformation, kindness, and willingness to work under saddle, before a carriage or out in the fields.

Next in succession followed Count Anton Günther von Oldenburg (ruling 1603-1667). Anton Günther was considered the wisest count to ever have ruled Oldenburg, quietly adding lands to the Oldenburg holdings. and arranging lucrative tolls on vessels passing along the Weser river running through the area. He enthusiastically expanded his predecessor’s efforts to develop the new horse breed, traveling from 1606-1609 extensively throughout Europe to bring back to Oldenburg the stallions of Spain, Poland, Italy, England, and Turkey.

Anton Günther’s vision was a lighter, more refined Oldenburg horse, yet no less powerful in its own way. To improve all the local horses and not just his own stable, he encouraged the local farmers and his tenants to use his stallions and promoted education in equine husbandry. He also instituted horse markets in the area to encourage a new and flourishing trade. Anton Günther was fondly known as “The Stablemaster” because of his passion for, and knowledge about horses, particularly the Oldenburg horses.

Soon the fine 17th century Oldenburgs were in demand throughout Europe, not only as tall, attractive carriage horses, but refined saddle horses who yet had substance. On one of his wedding days (research not able to determine which of the three), Leopold I, King of the Holy Roman Empire, rode through Vienna on a black Oldenburg stallion while his wife followed in a magnificent carriage pulled by eight white Oldenburgs (referred to as “Ermine” in color after the lush white winter coat of the weasel). And the Oldenburg horses saved their province during the Thirty Years War (1618-1648), when Anton Günther cleverly gifted 200 valuable horses, over time, to the generals Mannfeld and Tilly. The state of Oldenburg was not invaded, farms were left alone, and its populace survived the dire wartime famines in much better condition that other states throughout Germany. 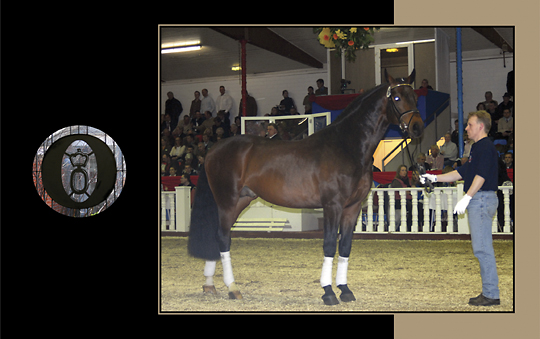 The few records extant, indicate that Anton Günther bred the horse Kranich (Crane in German) who was born about 1640, and this beautiful dapple-grey stallion, who turned white with age, became his favorite mount. Kranich was indeed of Spanish blood, probably part-bred, though his pedigree has been lost. The horse’s extraordinarily long mane and tail dragged the ground, and the paintings and other artwork of the time suggest that Anton Günther tremendously enjoyed riding out on his gloriously braided and otherwise decorated stallion. At some point, apparently, Anton Günther and Kranich undertook classical training, as they took pleasure in performing the passage for onlookers as they traveled their way.

The favored Kranich also served as one of the forefathers of today’s Oldenburg horse, one of Europe’s oldest warmblood breeds. In fact, the fond memory of this wise ruler of old Germany and his beloved stallion are alive to this day, honored in festivals not just in Oldenburg, but also throughout Germany. “Appearances” of Graf Anton Günther von Oldenburg and the wonder horse Kranich may even be made with the cooperation of the famous modern Oldenburg stallion Inselfeurt. The legend of the pair resonates in many other places…in a statue in Oldenburg, a mosaic-tiled school wall, and a fantasy portrait painted on the side of a large hotel. And, the pride of Anton Günther, the fabulous mane and tail of Kranich, reside today in the Oldenburg museum.

So much of this story is unfortunately lost and, therefore, so much left to wonder about. Why was the stallion named “Crane”? Could it be because of his pale color and long slim legs? How long did he live? What foals did he sire? What modern Oldenburg horses could be traced to the illustrious Kranich’s lineage? When Anton Günther died in 1667, did he leave a grieving Kranich or, had he already grieved the loss of Kranich?

In the end, after hours of research, I did answer my original question: what was the relationship of the painting of the Spanish-looking horse to the Danish castle? After Anton Günther’s death, his inheritance was split up as he had no children in marriage. As his widow had no rights of inheritance, the King of Denmark inherited the state. And, so, this prized artwork depicting the wonder horse Kranich, was destined to follow to Denmark along with the rule of the Oldenburg province where he was bred and born.