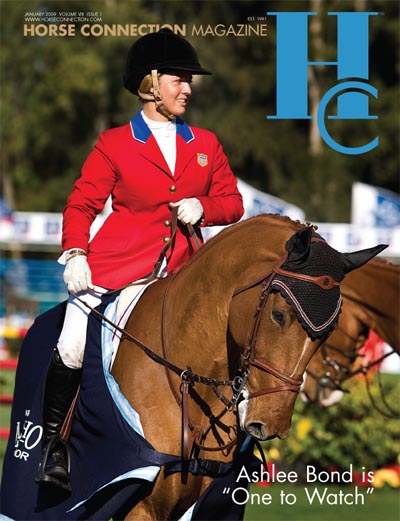 Saddling up for Legalization – January 2009 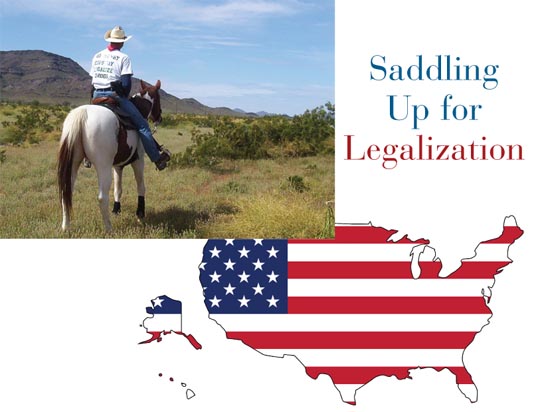 The big plain letters spelling this message across an otherwise basic T-shirt popped out at the onlooker, and were easily discernable at considerable distance from wherever the rider sat atop his horse. This simple yet potentially volatile statement sparked conversation, and debate—and the cowboy cop carried it like a human/equestrian billboard through towns, cities, and even deserts all across America…that is, literally across America, the whole way from ocean-to-ocean in one continuous journey.

Howard Wooldridge, a retired officer and detective with a stellar 18-year record, may seem an unlikely candidate to carry a pro-legalization message to the masses. Equally unique is the Paul Revere/Pony Express kind of method he thought up for getting the dialog going with America. But that’s Wooldridge: sincere, outspoken, fluent in four languages, armed with hard facts, and always fearlessly blazing new trails. Plus, Howard and his horse, Misty (Smooth Georgia Mist) already had ridden across the country once, so they knew exactly what lay in store for them on this journey.

In the ranks of Long Riders, Wooldridge holds the distinction of being not only a well respected member of The Long Riders’ Guild, but the only Long Rider known to have traveled coast-to-coast across America in both directions, ever. The Royal Geographical Society (the world’s largest geographical organization, established in 1830, acknowledged the significance of Howard’s saddle-tramping by honoring him as a Fellow. His one-eyed horse, Misty, is famous too for making both journeys, although she walked along beside another saddle horse for the latter part of the second trip. Misty is likewise famous for writing the memoir of their first ride together, Misty’s Long Ride (Howard helped her with the spelling).

The first Long Ride the pair made stretched from the Atlantic to the Pacific in 2003. The second trip from the Pacific back east to the Atlantic in 2005 was spurred by Wooldridge’s motivation to get out and talk to people in America about his firm conviction that the United States can benefit in many extremely important ways by changing its current drug policies.

This equestrian adventurer is hardly alone in the ranks of police feeling this way. He is part of an organization called, Law Enforcement Against Prohibition (LEAP, www.leap.cc), which lobbies hard to change entrenched views and convince lawmakers of real benefits that can result for law enforcement officials, tax payers, and the rest of the country from a change in drug policies. 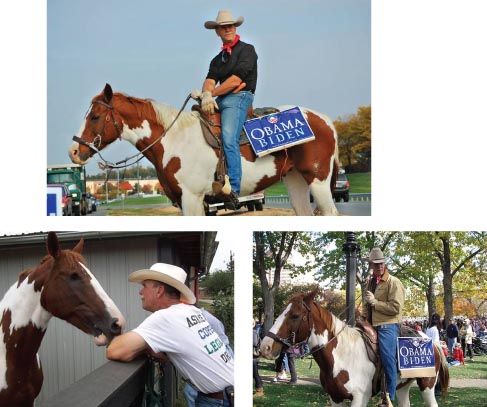 Wooldridge’s own words certainly best describe his endeavors. The following interview provides some insight into his most unique modern equestrian expeditions.

What got you fired up to ride across country to begin with? And then again?

“Without dreams, the spirit wanes and eventually dies. At 52 I had ridden a horse around the pyramids and walked in the shadow of Mt. Everest. The concept of riding my horse across North America began as a daydream, then an idea, then a project that I made happen.”

“The second trip was pure politics. I knew that while riding across the country, I would generate media attention and thus move my issue of ending Modern Prohibition.”

Tell a little about your partner in this, Misty.

“Misty was bred, born and spent her first two years just north of Fort Worth, Texas. She is three quarters paint and one quarter we don’t know, making her a registered Pinto. Her markings are Tobiano. At 15.2h she was big enough to make the journey, especially with me walking every third mile. She has a natural calm and giving disposition, crucial for the Long Ride next to busy U.S. highways. I received her at five and she was only halter broke. My former wife Lin and I started her. After three months I switched from using a soft bit to a Hackamore bridle. She has not had a bit in her mouth since 1999.”

“Shortly after arriving at our ranchette in Fort Worth, she suffered a severe blunt trauma to her right eye, probably from a kick. Six weeks later the surgeons removed the eye. After a few weeks of adjustment, she accepted her new condition, depending on me to keep her out of trouble. I never allow anyone to ride her outside of a controlled environment because of the eye.”

How would you describe the experience of Long Riding in a few words? Would you recommend it to others? 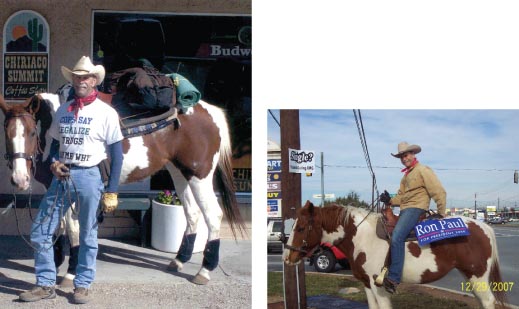 “Becoming a Long Rider is a life-changing experience. The road teaches humility and fellowship as horse and rider depend on the kindness of strangers to succeed.”

“Would I recommend it? (Wooldridge laughs at the word choice.) Yes. Anyone can do it. One only needs a good pony, an iron discipline and faith in oneself.”

The second ride had the purpose of creating awareness for ending prohibition; can you accurately explain what that means as you promote it?

“This modern prohibition – War on Drugs – has been the most disastrous, dysfunctional and immoral social policy since slavery. The policy generates the majority of felony crime, thus lowering our quality of life. My profession could lock up many more public safety threats like the DUI, child molesters, etc, if we did not spend close to 10 million hours chasing non-violent, adult drug users.”

“I have arrested child rapists. I have an idea of how much pain, suffering and future anguish the victims experience. Knowing that the perpetrators of this are going uncaught and unpunished because my colleagues focus on drug users drives me forward with an unwavering energy and commitment.”

What inspired you to that idea?

“18 years of police service translates that, till the moment of my passing, I will bleed blue if you cut me. I have a strong desire to ‘protect and serve.’ Since I can no longer arrest a DUI, moving the prohibition policy into the history books will improve public safety which is always my goal.”

How were you typically received across the country? 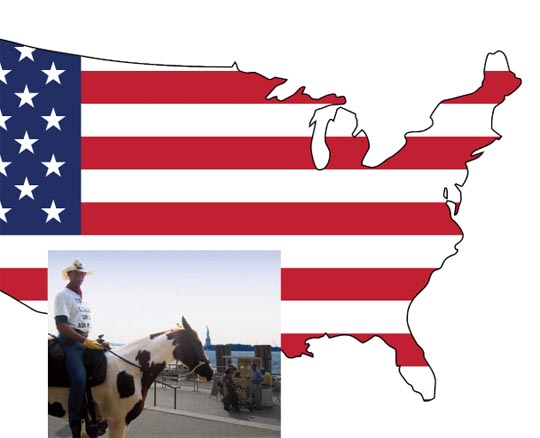 “The first ride was mixed, though overall positive. Wearing the shirt that said: COPS SAY LEGALIZE POT, a gentleman in Colorado, and months later one in Oregon, threatened to go home, get their gun and shoot me out of the saddle. That I was wearing my own 9MM Sig Sauer may have given them pause.”

“Regular folks took us in regardless of my politics. They simply saw a cowboy and horse that needed a good meal and a dry, comfortable stall.”

How did the Long Ride ultimately pan out as a catalyst for conversation and change?

“It was a fantastic tool, which sparked hundreds of conversations. The vast majority walked away with an understanding that changed their opinion.”

Did Misty help open the door for communication when you, a stranger, rode into new places that wouldn’t have happened if, say, you rode up on a Harley or a Toyota or with a backpack walking or bicycling?

“No question Misty was the key to meeting people. Needing water, I knocked on the doors of dozens of homes. Most of the time the person home was a woman, either alone or with small children. I looked tired & worn out but they always looked past that to see Misty. Without exception they opened their door and helped us. Several times I came inside and they fed and watered me. It was amazing.”

“Bicyclists do have some of the same experiences but nowhere near as often. The horse is THE generator of trust.”

What is your current life/work like? How have the Long Rides changed you?

“Currently I work some 50+ hours in the Washington, DC area, spending my hours in the US Congress. There I educate staff and Members of Congress on the need to end Modern Prohibition. The work is challenging and stressful. I always have to be ‘on.’ In its own way, it is much like police work.”

“On the other hand it is a joy to use every bit of knowledge and ability that I have built up over 57 years. I manage to speak my foreign languages on a regular basis. I am constantly creating new concepts to better project the message. Staffers and I have discussed non-drug issues from no-till farming to ocean fish farms to tax polices. I have to be ready to sound intelligent on everything.”

“Has the journey changed me? The Rides reminded me that the vast majority of people are good, giving and trusting. The Rides reminded me that no matter how distant the goal, taking it one day at a time, the goal comes closer every day. Then one morning there is the ocean. Ending Modern Prohibition is much like that as I work the halls of Congress. One day the policy will be over and we will return to Texas.”